How I reduced my electricity bill by 60%…

Posted on June 6, 2012 by lowcarbonlivingblog

The Wattson Solar Plus

In the 12 months from April 2011 through to the end of March 2012 I’ve managed to reduce my electricity consumption by over 60%.  I was pretty astonished by how much I’d saved and I put the majority of it down to a little gadget called Wattson.

Wattson (Watts-On!) is a wireless portable energy monitor which shows you the electricity you are using in your home in real-time.  I used what is known as the Wattson Classic (see details here) for the first 10 months before upgrading to the Wattson Solar Plus soon after I had my solar panels fitted.

There are a number of energy monitors (or smart meters as they sometimes called) on the market, however, what drew me to the Wattson was its design.  I’m a sucker for good design, particularly on gadgets which is probably why my office looks like an Apple Store!  Thankfully with the Wattson it’s not a case of style over substance as the monitor can show me the following in real-time:

The Wattson Solar Plus emits a coloured glow which immediately lets you know how much electricity is being used or produced.

Additionally the Wattson emits a coloured glow depending on your energy usage.  If I’m producing more energy than I am using it glows green.  It also learns how much energy I use when I’m not generating.  A blue glow lets me know I’m using less than my average amount of energy, a purple glows tells me I’m using my average amount of energy whilst a red glow lets me know I’m burning way more than usual. (quick turn off those lights!)  It also features a night mode (colours only) and a clock.

Anyway, enough of the technical jargon, let me tell you how the Wattson has completely changed the way we as a family consume our electricity.  In the early days before we got the solar array it really helped by showing the amount of energy each appliance was using. (I still can’t quite get over how much energy is needed to boil a kettle!)  In particular it showed the actual cost of energy for all the items on stand by (through a process of elimination, i.e. turning things off!)  You can program Wattson (through Holmes software) with the actual costs you pay for your electricity, this showed me that having my TV, Sky Box, Amplifier and Blu-ray player on standby was costing me around £60 per year!  Cue a Standby savasocket which cost £20 (see here) and this was reduced to around £10 (I still keep the Sky Box switched on.)  The best bit is it is all controlled from my all in one remote control.  One click of the off button does it all for me.

Oh, Oh.. I’m using 609 watts of electricity here and its glowing purple… cue a panic round the house to see what’s been left on!!

The other thing that was using lots of energy was the oven .  I’d always assumed that a microwave would be more energy intensive than an oven but I was very wrong.  If we can we now use the microwave in place of the oven and I think it’s saved us hundreds of pounds.  I now have low energy bulbs in every socket in the house now and I can clearly see the savings on this via Wattson. Now most of these savings have been made prior to my Solar PV installation.  Combining the solar array with the Wattson allows me to get maximum efficiency out of the array.  At any time I can see EXACTLY how much energy is being produced from the array, and as soon as I’m in negative territory (i.e. generating more than I’m using) it is the time to switch on any electrical items I might need.  If its a few hundred watts being generated I’ll make sure that any electrical device that needs charging (laptops, phone’s, iPads, batteries etc.) can all be charged for free.  If the sun goes in you know immediately via Wattson and you can just switch it off.  You can read more about my solar array here. 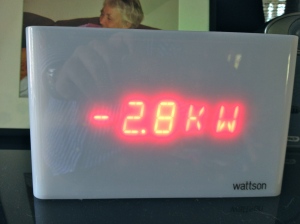 In this photo through my solar array I’m feeding 2.8 kWh back into the grid. Time to do the washing, ironing, vacuuming, cooking…

This really comes into its own on a sunny day when I can be over generating by 3 or 4 kWh, as soon as we get anywhere near this its on with the washing machine, dishwasher, vacuum cleaner (these three devices are probably the highest users of electricity in our household – how do I know?  Wattson of course!)  If we’ve done a lot of washing and the washing line is full outside we can also use the tumble drier using 100% renewable energy at zero costs to ourselves.  This is only used in extreme cases though.Anyway, enough of the Wattson, I must add I don’t work for them and don’t have any shares in the company in case you were wondering!  It is just a great product that I’m really passionate about.  Probably the main breakthrough Wattson provided in my house was getting the rest of the family interested in saving energy.  My partner has literally become obsessed with it which is great and although my daughter is only 4 even she is beginning to take an interest in it.

What Wattson does is allow us to control the energy we use in our homes and its visual impact positively encourages you to look at it.  I firmly believe that this type of product will have a significant impact on not only reducing the CO2 we all burn in our households but, as I’ve proved, you can save yourself some serious money into the bargain.

I’ll dig out my last electricity bill soon which shows the energy reduction made in the same quarter the previous year.

My Electricity Bill showing my usage now and for the same period last year!!  (Note it was based on actual, not estimated readings!)