Posted on June 1, 2012 by lowcarbonlivingblog 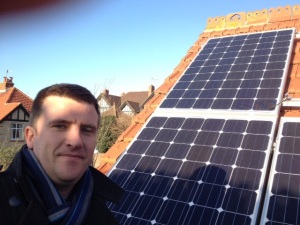 I  had a Solar PV system installed on my house in December 2011,  just before the governments (now deemed illegal) Feed in Tariff (FITs) cuts.  For my array I went with a 4 kw system incorporating Suntech panels and an SMA Inverter.   I looked at a number of different panel manufacturers for my roof and Suntech for me was the stand out panel in terms of cost vs. efficiency.

As I mentioned my panels were installed (by South Downs Solar if you are wondering) just before the governments first residential FITs cut.  I’d been considering PV for about 6 months before this and I do like to procrastinate and weigh all the different options up before committing to something like this. However, the governments drastic 50% cut in the tariff with just a six-week window pushed me to make a decision.  I have to say it is probably one of the best decisions I’ve ever made.

Some of the panels on the roof

On a good day I’ll produce somewhere in the region of 26 kWh of energy.  To bring this into some context, even if I run the washing machine twice in a day, the dishwasher once, a couple of cycles of the tumble dryer, have the lights on, television, sky box, charge my phone etc. I only use around 15 kWh!!  Of course I don’t produce 26 kWh every day but since I’ve had the array fitted my electricity consumption has been reduced by more than  60%!!  (I’ll be posting more on this soon.)  I also use a Wattson Solar Plus energy monitor which I think is brilliant.  It lets me know exactly how much energy I am using, how much the system is producing, and crucially will tell me when I am producing more energy than I am using.  Again I’ll be blogging specifically about the Wattson fairly soon but in the meantime you can check it out here. 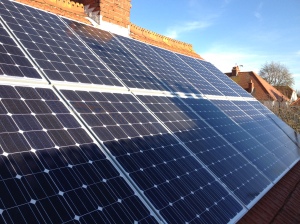 The Suntech panels in all their glory. The shading you can see in the photo only happens for about two months of the year (December & Jan). the rest of the year we have no shading issues.

To achieve the 60% reduction we’ve had to fundamentally change the way we use our energy.  Gone are the days when we ran the dishwasher in the evening to take advantage of cheaper tariffs.  Now on a sunny day we do all the washing, run the dishwasher, recharge any batteries, do the vacuuming and often, if it allows, cook that night’s dinner.  Likewise, on a dark, wet rainy day if we don’t have to do any of the above we won’t.

It’s still early days at the moment but from late December 2011 to the end of March 2012 I produced around 700 kWh of energy which gave me a payback from the feed in tariff in the region of £350 for the period. This is 48% above what the government SAP calculations predicted and I’m currently on target to reach payback in under 5 years.

I’ll be regularly updating this blog with the performance of the array and I’m also starting to look at getting some remote plug socket switches installed so that if no one is home and the Sun comes out I can turn on the washing machine! 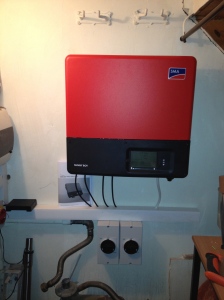 In the meantime for the techies out there here are the details of my system:

2 Responses to My Solar PV Array